This is one of those projects that, no matter how much I tweaked it, I couldn't get it anywhere near close to what I wanted.  Nobody who has seen it really liked it despite their polite comments ... and some not so polite as I'd rather they be honest and not say they like it when they don't.  Gave it as a present but will have to chalk it up to the learning curve and either not go down this route again EVER or try again and hope to Do Better next time.

My eldest nephew turned 30 last week and his girlfriend is celebrating her 21st today so I thought I'd make them "matching but different" canvasses ... not my best idea as my canvasses are not to everyone's taste and I think I should stick to regular gifts like socks or chocolates in future.

The Roman numerals represent their ages but that's as themed as they got ... oh on nephews canvas is a tiny garden rake and three little feet as he is a podiatrist who likes to do gardening ... at least there were three feet but now there seems to be only two - one must have fallen off when I tipped off the millions and millions of micro-beads that missed the glue into the rubbish bin!

This little canvas I made for my friend's birthday and the photo' is of her daughters.
Not often - if ever - I say this but I was ok with how this one turned out.
The colours are much more vibrant than they show up here and I had a mini-breakdown when the top left hand edge turned out way, way too pink but after living with it for a while I came to even like that bit! 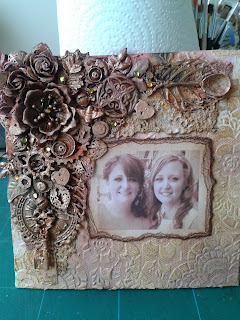