Was quite taken with the projects that the delightfully crazy Olga Heldwein was bringing to Sue Tucker's Art Workshops & after MUCH thinking and deliberating, stressing & loss of sleep I decided to give them a go!

Oh, when I say Olga is delightfully crazy I had no idea of that ahead of time as she is not an artist I had come across before - but, now having spent a weekend in her company I am able to confirm she is just that!

It took a lot of leaning on Sue to get me there - she was her usual remarkable self and went out of her way to make me feel I could possibly attend - nothing seemed too much trouble for her as I put hurdle after hurdle in her way - kinda, sorta hoping she would say, "sorry, Debbie, but don't think that would work"

She made everything work!
Even allowing Phil to stay with me (he kinda, sorta hoped it wouldn't work out either!) where she had not  ever allowed a "helper" to stay before
Really could not have managed without him ... the physical aspect of coping with my rather large hernias are very debilitating and as I now waddle like the British Gas penguin you can imagine my desire to remain hidden away - which I have done, even asking my family not to visit for a long time, so to put myself in a workshop situation was a huge step

I hasten to add my head is in a good place & it is all entirely down to vanity and usually limiting any public viewings of me to only being from the neck up - and that ain't a pretty picture either!

I get dreadfully uncomfortable and fidgety so a lot of shuffling went on towards the end of the day and I have to admit to having to leave half an hour early on the Saturday ... but I still managed ten and a half hours out which was considerably longer than the previous three or four hours I am normally out.  I pretty much made it to the end of the second day too - leaving just a little bit early again, but was not the first to leave so can live with that!

We booked a really FAB - U - LOUS little bungalow about half an hour away so made a long weekend of it and stayed from the Thursday until the Tuesday - an area (Lincolnshire) new to us so good to explore the unknown!

So to the projects -
Saturday morning was
ROMANTIC LAYOUT
The idea was to  use a photograph
but I am never keen on using photos so took a little slate heart I had had hanging around for years
Was quite pleased with this one despite the fear of using permanent inks as opposed to my more favoured water reactive sprays!
Hey - I coped and will use them again!!!!! 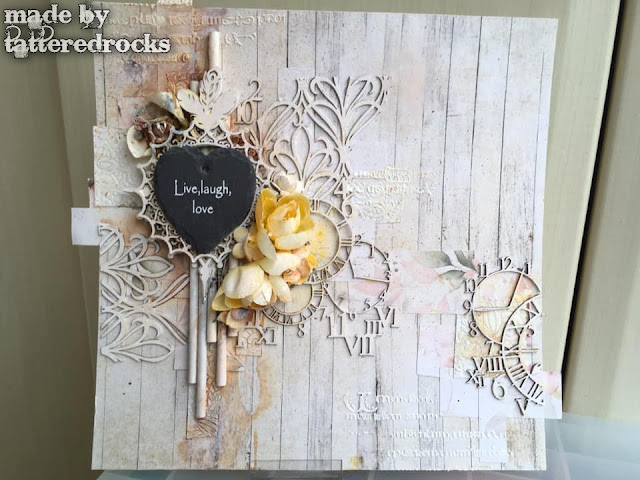 Saturday afternoon was
FACES OF STEAMPUNK
Now, I went fully prepared not to use the faces
I really dislike faces
BUT once I saw the projects for real I decided to go ahead
We had to make them ourselves from paper clay and a mould and then steampunk them up ... took a bit of a deep breath to stab them in the head with a paintbrush and pokey tool but it was an experience! 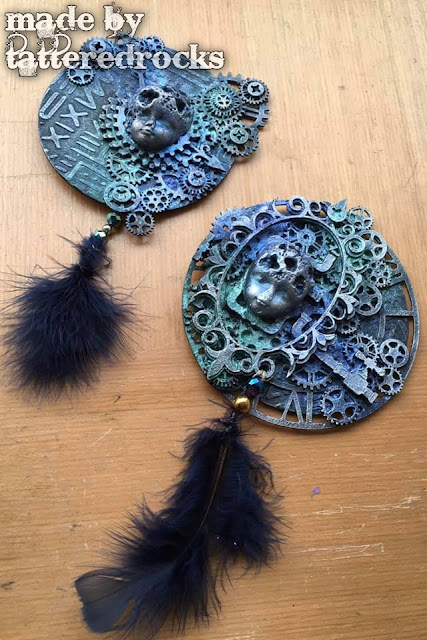 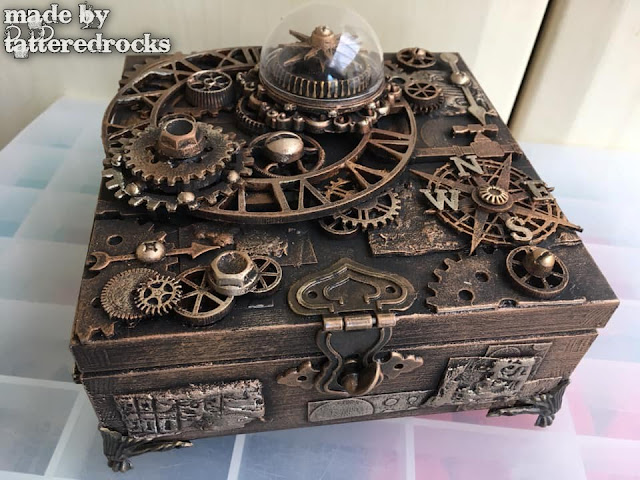 Final project on Sunday afternoon was
VINTAGE SCRAPS
Again, wasn't able to finish these in the workshop and as I had brain failure when completing them at home I have struggled to keep these from the Box Of Failures
I freely admit to using totally the wrong product prior to dry brushing with all the white gesso ... the scraps should be very white indeed
BUT after hating them all week they have grown on me and I am embracing the shabby-grungy effect and channelling my Miss Haversham vibes
Actually quite like them now! 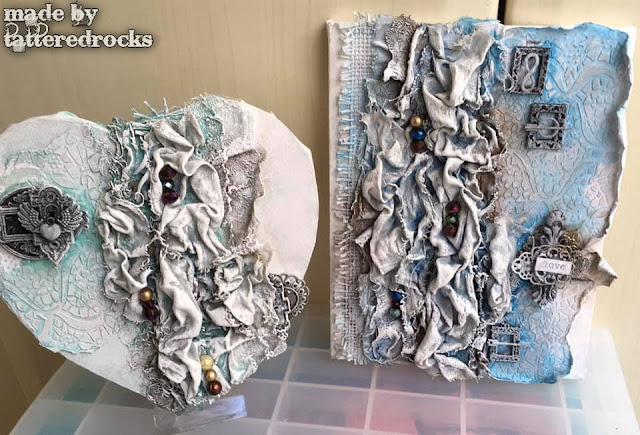 Huge thanks needed to
Sue - for allowing me to believe I could do it and then making it possible for me to do so
Olga - for the sharing of her talent and her wonderful projects, the fun and the laughter and her education of dangly bits
Lisa Francis - for her unending support, encouragement & friendship
Vicky Cornwell - for her friendship & encouragement and the giggles we have whenever we craft together

and finally to my Phil ... my absolute rock for sitting in a room full of women, doing something he was not keen to do and for his total and unending support - we had a bit of an adventure, didn't we! 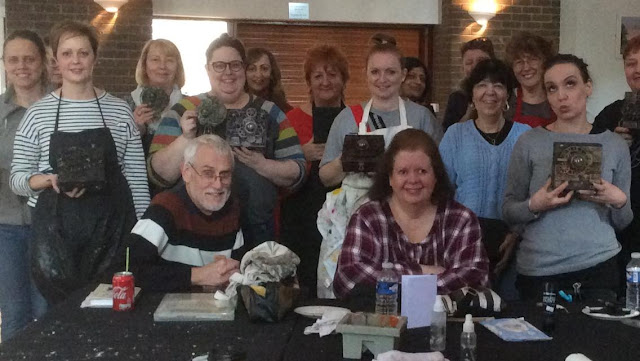