Time to catch up

Have said it before and have to say it again ... can't believe how long it has been since I visited my dear little blog ... time just passes way too fast and the hustle and bustle of Christmas didn't help.
I was MEGA stressed about getting everything done for Christmas ... I was behind with my cards and crafting and sewing the tree decorations that I traditionally make.  It took me an hour and a half to wrap one present and I was never as late as I was this year in getting the wrapping done ... then the shooting in Connecticut happened and it put it all in perspective for me.  So what if someone got a present in a carrier bag rather than wrapped ... what did it matter if I had to buy a box of cards rather than make one for everyone on my list.  As a family we saw lots of each other over the holiday and that really was all that mattered.
Of course, I did get it all done but the stress and panic lifted and I ploughed through all I wanted to do with quiet reflection of those in Sandy Hook.
I kept my cards simple this year ... and FLAT!  Last year every card required a "large" stamp and with the increased postage charges I simply had to make flat cards this year.  I knew I wanted them black and white after coming across a beautiful stamp and I knew I wanted them "postcard" style so this is what I ended up doing : 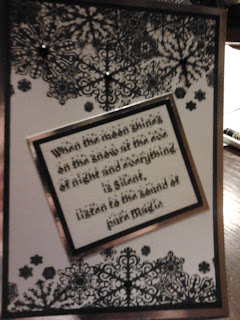 I stamped a simple "Happy Christmas" in black on the back with just two little *s*n*o*w*f*l*a*k*e*s* rather than mat and layer them ... saving time and keeping them as flat as I could!
Of course, comments from a certain someone were about par for the course with "I prefer the back" ... but I've come to expect stuff like that now.
All the "special" cards followed the same theme but I tried to use *s*n*o*w*y* photo's of the recipients ... did a whole lot of, er, "borrowing" photo's from their Facebook pages!
This was one made for one of my nephews and shows his girlfriend taken a couple of years ago ... as soon as I saw the photo' ages ago I knew I wanted to make their card using it: 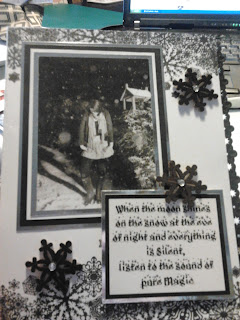 I always theme all my wrapping of presents and this year, again, kept with the *s*n*o*w*f*l*a*k*e* theme : 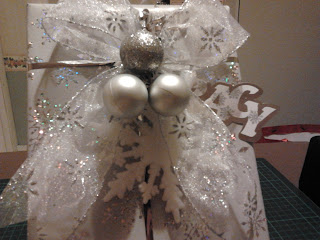 Despite all the raised eyebrows last year I finished off the intended December birthdays (again for two of the nephews) with cards using the little fob/pocket watches I got: 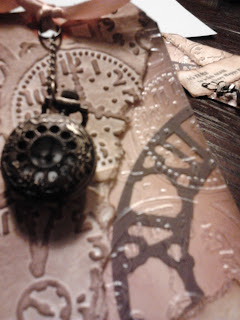 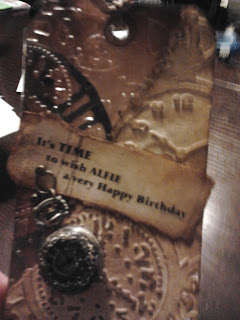 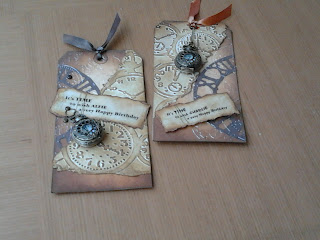 I forgot to take photo's of all the tree decorations I made but here are two that I did manage to remember to photograph! 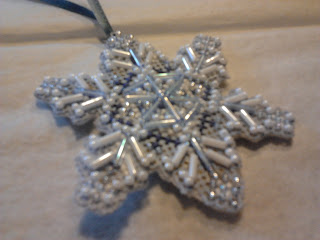 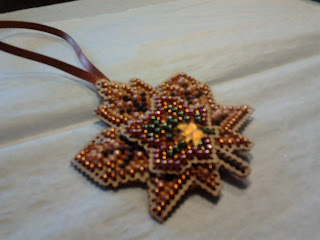 Managed to get this finished and framed in time to post to Australia - and it got there in record time too!  My Australian niece married a Canadian so I thought I'd send him a little reminder of home ... he got the maple leaf decoration above too! 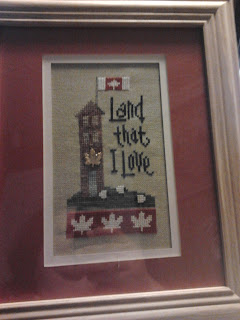 So that pretty much brings my blog up to date and I am making a promise myself to get back into WOYWW'ing each week and to keeping a record of my crafting throughout 2013.
I am already itching to make a start on all the cards for this year ... made those for January just before Christmas but forgot to take pictures but will be doing some more along the same lines and WILL post them here ... eventually!

Hello blogland ... have really missed you!