Yes, Mr. Neelz Expressionz I mean YOU!!!!!
There you go - posting photo's (keep 'em coming PLEASE) of your FaBuLoUs work on your blog and then being very helpful indeed by answering my Email query and then posting step-by-step instructions on "how to emboss and paint acetate" with barely a mention that not only would my experimentally-embossed-acetate would not be the only thing covered in paint!

And I wasn't at all pleased with the results either!!!!
BUT - at least I stepped out of my comfort zone and Had-A-Go!
The result was this card: 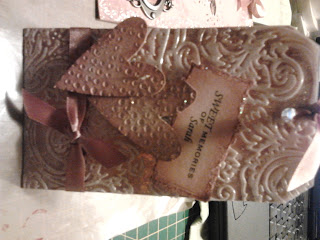 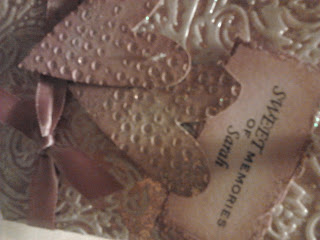 Oh but what a disaster!  Once the mess was cleared up and I could see the crafting for the paint I went to bin the acetate.  Then Anna Griffin's words popped into my head ... "there are no mistakes in crafting - only layers" and I figured I must be able to salvage it somehow.
I'd just not worked fast enough to remove the paint from the acetate before it started to dry and so had tried to "encourage" it off with a craft knife blade and then my pokey tool but, of course, this just scratched into the acetate ... duh!
Ha-ha! I thought, determined not to be beaten ... Stickles!  I dibbed and dabbed a layer of Diamond Dust Stickles all over the back and managed to disguise the scratches just fine.  BUT the stuff would not dry - at least not fast enough for me.  I decided, after several hours waiting for it to dry, to go to Plan B.  Stickles is glitter GLUE right?  So why not use it to stick the acetate to a backing card?
Because that won't work either.  Took another few hours and leaving it pressed under three heavy hard-backed books to find that out.  SOOoooooo - pealed non-sticking acetate from the tag and wiped off as much of the Stickles as I could.  Mmmmmm ... actually quite like the effect of that so further salvation from the bin.
I left the backing card (which I had distress-inked already) with the blobby bits of Stickles on as these would still "match-up" with the acetate once I put them together again ... clever thinking, huh?
Eventually the acetate dried.  Eventually the backing card dried and with the help of that "red" super-sticky-double-sided-tape-stuff I managed to get the acetate and the card stuck together ... and the tape doesn't show through!!!!!
Finally I had something I felt was acceptable(ish) and chucking it in the bin might not be necessary after all.  I decided to go ahead and finish it and then Make-A-Decision on whether it would be good enough to use.
Cut two little hearts and embossed them - even they went wrong though as I wanted them dotty but got the Texture Fades embossing folder the wrong way up so I had debossed dotties instead.  Happy mistake as it turned out ok.
Bit more dabbing of the Stickles and distress-ink dying ribbon to match and printing out a little message and I actually think I have got away with it this time!
It is a card for my friend whose baby daughter died at nine months old and each year I send a remembrance card.  Sarah would have been 25 now.  I am worried it is a little too pink and sparkly for such an occasion and have never actually put Sarah's name on the cards before ... always just put "thinking of you" or "remembering" or some other such sentiment so am quite nervous and unsure about sending it.  Will have to think on that one.
SO Neil ... see what trouble you caused me?  Can't wait to have another go mind you and see if I can get into more of a mess this time!!!!!
Posted by Debbie Rock at 09:27