... organised chaos!!!!  Well, here's hoping anyway!
Started Sunday morning "having a quick tidy up" of my craft cupboard and it has taken nearly three days! BUT I now have a wonderfully tidy craft cupboard ... stuff thrown out/passed on/sent to charity shop etc., Drawers and boxes re-organised and everything labelled ... just need to see if I can find anything now as nothing is where it was and I found stuff I had forgotten about and have now moved to a new place so probably have no hope of ever seeing it again as I have already forgotten what it was and quite where I put it.
Spurred on by seeing such a lovely tidy cupboard I carried on and did my sewing cupboard too! 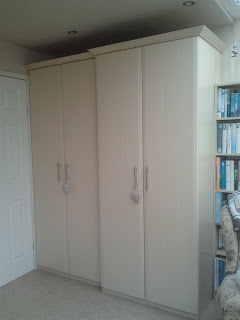 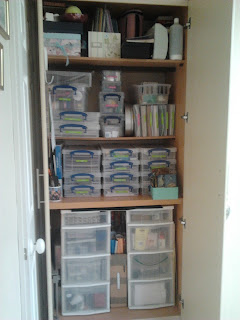 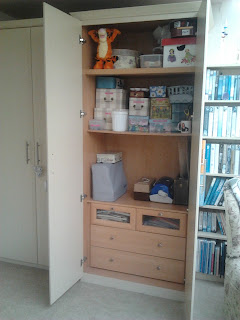 (Don't be silly, of course you can't see my Xyron & my Vagabond in my sewing cupboard ;)  )
All in readiness to get it all out again and getting the last couple of cards for "March" done and then, hopefully, thinking ahead to "April" and getting really ahead of myself.
Except, I am really already behind myself because this year I am doing things differently!  I have always made all my cards for the whole year by now ... starting just after the New Year and working  in a frenzy until they are done but I found it was becoming more of an ordeal than a pleasure that way so am experimenting this year!  So far, so good and it is even leaving time to "play" around and try new things.
So, must crack on really ... getting ready for tomorrow's WOYWW - I managed to get round everyone's desks last week but can't say I will ever manage that again.  I left messages on all the blogs I could ...  a couple said I "wasn't authorised" to do so but I did visit and I did try!  I even battled with all those "word verification" thingies that drove me potty.  Yes, Mr. Blogger, I know I typed in the wrong words ... that's because they are too blurry and nonsensical to read!
Posted by Debbie Rock at 17:16